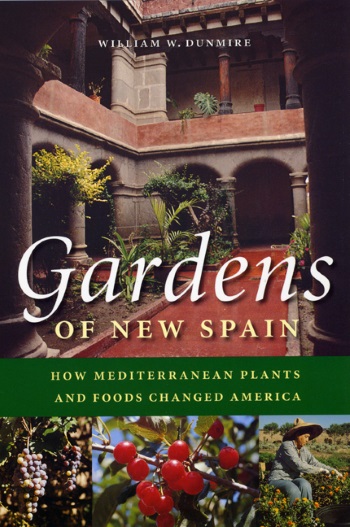 From the publisher: When the Spanish began colonizing the Americas in the late fifteenth and sixteenth centuries, they brought with them the plants and foods of their homeland—wheat, melons, grapes, vegetables, and every kind of Mediterranean fruit. Missionaries and colonists introduced these plants to the native peoples of Mexico and the American Southwest, where they became staple crops alongside the corn, beans, and squash that had traditionally sustained the original Americans. This intermingling of Old and New World plants and foods was one of the most significant fusions in the history of international cuisine and gave rise to many of the foods that we so enjoy today.

Gardens of New Spain tells the fascinating story of the diffusion of plants, gardens, agriculture, and cuisine from late medieval Spain to the colonial frontier of Hispanic America. Beginning in the Old World, William Dunmire describes how Spain came to adopt plants and their foods from the Fertile Crescent, Asia, and Africa. Crossing the Atlantic, he first examines the agricultural scene of Pre-Columbian Mexico and the Southwest. Then he traces the spread of plants and foods introduced from the Mediterranean to Spain’s settlements in Mexico, New Mexico, Arizona, Texas, and California. In lively prose, Dunmire tells stories of the settlers, missionaries, and natives who blended their growing and eating practices into regional plantways and cuisines that live on today in every corner of America.