From Silver to Cocaine: Latin American Commodity Chains and the Building of the World Economy, 1500-2000 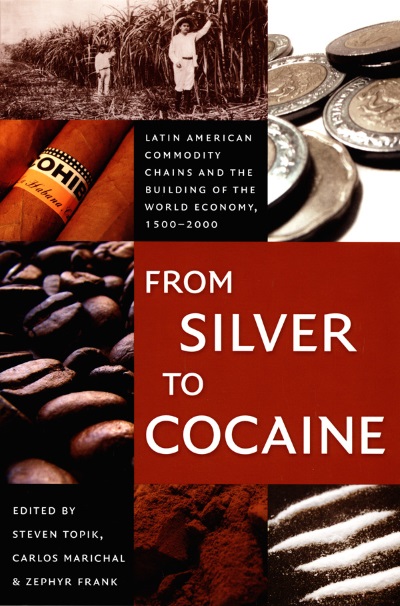 From the publisher: Demonstrating that globalization is a centuries-old phenomenon, From Silver to Cocaine examines the commodity chains that have connected producers in Latin America with consumers around the world for five hundred years. In clear, accessible essays, historians from Latin America, England, and the United States trace the paths of many of Latin America’s most important exports: coffee, bananas, rubber, sugar, tobacco, silver, henequen (fiber), fertilizers, cacao, cocaine, indigo, and cochineal (insects used to make dye).

Each contributor follows a specific commodity from its inception, through its development and transport, to its final destination in the hands of consumers. The essays are arranged in chronological order, according to when the production of a particular commodity became significant to Latin America’s economy. Some—such as silver, sugar, and tobacco—were actively produced and traded in the sixteenth century; others—such as bananas and rubber—only at the end of the nineteenth century; and cocaine only in the twentieth.

By focusing on changing patterns of production and consumption over time, the contributors reconstruct complex webs of relationships and economic processes, highlighting Latin America’s central and interactive place in the world economy. They show how changes in coffee consumption habits, clothing fashions, drug usage, or tire technologies in Europe, Asia, and the Americas reverberate through Latin American commodity chains in profound ways. The social and economic outcomes of the continent’s export experience have been mixed. By analyzing the dynamics of a wide range of commodities over a five-hundred-year period, From Silver to Cocaine highlights this diversity at the same time that it provides a basis for comparison and points to new ways of doing global history.

Steven Topik is Professor of History at the University of California, Irvine. His books include The World That Trade Created: Society, Culture, and the World Economy, 1400 to the Present (with Kenneth Pomeranz) and Trade and Gunboats: The United States and Brazil in the Age of Empire.

Carlos Marichal is Professor in the Centro de Estudios Históricos at El Colegio de México. He is the author of A Century of Debt Crises in Latin America: From Independence to the Great Depression, 1820–1930 and numerous books in Spanish.

Zephyr Frank is Assistant Professor of Latin American History at Stanford University. He is the author of Dutra’s World: Wealth and Family in Nineteenth-Century Rio de Janeiro.