From Betty Crocker to Feminist Food Studies: Critical Perspectives on Women and Food 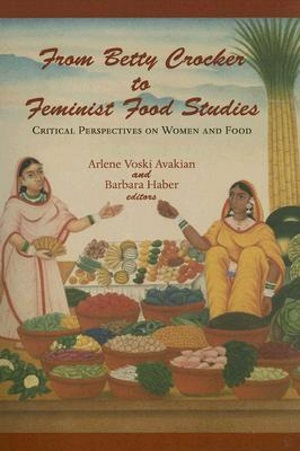 From the publisher: In recent years, scholars from a variety of disciplines have turned their attention to food to gain a better understanding of history, culture, economics, and society. The emerging field of food studies has yielded a great deal of useful research and a host of publications. Missing, however, has been a focused effort to use gender as an analytic tool. This stimulating collection of original essays addresses that oversight, investigating the important connections between food studies and women’s studies.

Applying the insights of feminist scholarship to the study of food, the thirteen essays in this volume are arranged under four headings—the marketplace, histories, representations, and resistances. The editors open the book with a substantial introduction that traces the history of scholarly writing on food and maps the terrain of feminist food studies. In the essays that follow, contributors pay particular attention to the ways in which gender, race, ethnicity, class, colonialism, and capitalism have both shaped and been shaped by the production and consumption of food.

In the first section, four essays analyze the influence of large corporations in determining what came to be accepted as proper meals in the United States, including what mothers were expected to feed their babies. The essays in the second section explore how women have held families together by keeping them nourished, from the routines of an early nineteenth-century New Englander to the plight of women who endured the siege of Leningrad.

The essays in the third section focus on the centrality of gender and race in the formation of identities as enacted through food discourse and practices. These case studies range from the Caribbean to the San Luis Valley of Colorado. The final section documents acts of female resistance within the contexts of national or ethnic oppression. From women in colonial India to Armenian American feminists, these essays show how food has served as a means to assert independence and personal identity.

Arlene Voski Avakian is professor of women’s studies at the University of Massachusetts Amherst and editor of Through the Kitchen Window: Women Explore the Intimate Meanings of Food and Cooking.

Barbara Haber, former curator of books at the Schlesinger Library, is author of From Hardtack to Homefries: An Uncommon History of American Cooks and Meals.