Fortune Cookie Chronicles: Adventures in the World of Chinese Food 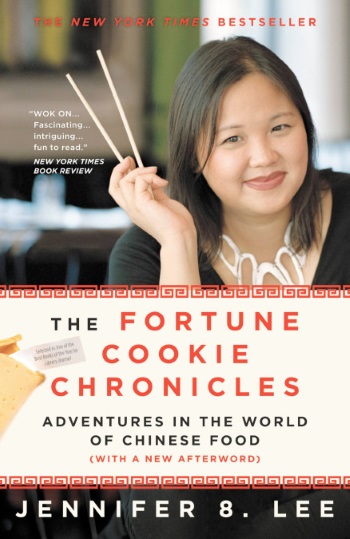 by Jennifer B. Lee

From the publisher: If you think McDonald’s is the most ubiquitous restaurant experience in America, consider that there are more Chinese restaurants in America than McDonalds, Burger Kings, and Wendys combined. New York Times reporter and Chinese-American (or American-born Chinese).

In her search, Jennifer 8 Lee traces the history of Chinese-American experience through the lens of the food. In a compelling blend of sociology and history, Jenny Lee exposes the indentured servitude Chinese restaurants expect from illegal immigrant chefs, investigates the relationship between Jews and Chinese food, and weaves a personal narrative about her own relationship with Chinese food. The Fortune Cookie Chronicles speaks to the immigrant experience as a whole, and the way it has shaped our country.

Jennifer B. Lee, the daughter of Chinese immigrants and a fluent speaker of Mandarin Chinese herself, grew up eating her mother’s authentic Chinese food in her family’s New York City kitchen before graduating from Harvard in 1999 with a degree in Applied Mathematics and economics and studying at Beijing University. At the age of 24, she was hired by the New York Times, where she is a metro reporter and has written a variety of stories on culture, poverty, and technology.