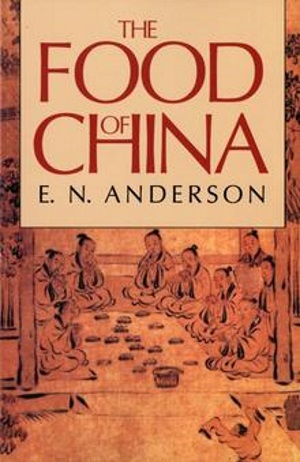 From the publisher: To feed a quarter of the world’s population on only seven percent of the world’s cultivated land and at the same time to have developed a renowned cuisine is perhaps the most exemplary achievement of the Chinese people.  What accounts for their success?  And what can be learned from it in this age of widespread hunger?

E.N. Anderson’s comprehensive, entertaining historical and ethnographic account of Chinese food from the Bronze Age to the twentieth century shows how food has been central to Chinese governmental policies, religious rituals, and health practices from earliest times.  The historical survey of agricultural and culinary customs, in the first half of the book, offers a wealth of fact and interpretation on such topics as the effect of government policy on agricultural innovation; the relation of medical beliefs to appetizing cuisine; the recycling of waste products on the farm; the traditional absence of food taboos (including the practicality of eating one’s pests, or feeding them to pigs and chickens, instead of poisoning them and the environment); and the key factors in the gourmet quality of Chinese food from the simplest to the most elaborate dishes.

Without glossing over the occurrences of famine China’s history, Anderson concludes that the full story is one of remarkable success in feeding maximum populations over the millennia.  Underpinning this accomplishment, he cites China’s traditional stress on food as the basis of the state and as fundamental not only to individual well-being but to the enjoyment of life.

Anderson turns to present-day China in the latter half of the book, describing in rich and enticing detail the regional varieties in Chinese diet, food preparation, and rituals of eating and drinking.  These lively, readable chapters as well as those in the first half of The Food of China make it a prime source for anyone—general readers and scholars alike—with an interest in Chinese history or food.

E.N. Anderson is professor of anthropology at the University of California, Riverside.