Food in Colonial and Federal America 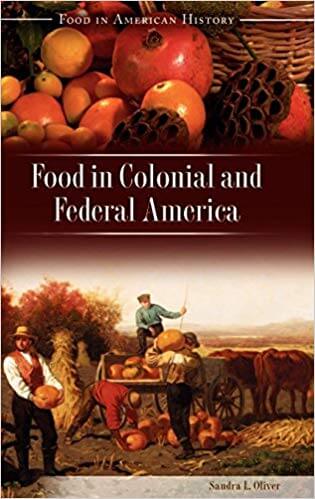 From the publisher: The success of the new settlements in what is now the United States depended on food. This book tells about the bounty that was here and how Europeans forged a society and culture, beginning with help from the Indians and eventually incorporating influences from African slaves. They developed regional food habits with the food they brought with them, what they found here, and what they traded for all around the globe. Their daily life is illuminated through descriptions of the typical meals, holidays, and special occasions, as well as their kitchens, cooking utensils, and cooking methods over an open hearth. Readers will also learn how they kept healthy and how their food choices reflected their spiritual beliefs.

This thorough overview endeavors to cover all the regions settled during the Colonial and Federal. It also discusses each immigrant group in turn, with attention also given to Indian and slave contributions. The content is integral for U.S. history standards in many ways, such as illuminating the settlement and adaptation of the European settlers, the European struggle for control of North America, relations between the settlers from different European countries, and changes in Native American society resulting from settlements.