Food in Antiquity: Studies in Ancient Society and Culture 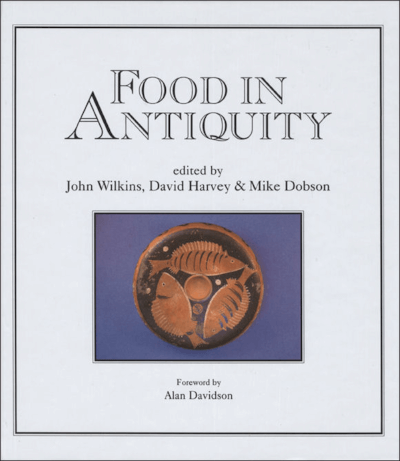 From the publisher: Food as a cultural symbol was as important in antiquity as in our own times and Food in Antiquity investigates some of the ways in which food and eating shaped the lives and thoughts of the indigenous peoples of the ancient Mediterranean.

In this volume thirty contributors consider aspects of food and eating in the Greco-Roman world. This is the most comprehensive exploration of questions relating to food in antiquity in this country. The authors, some specialists in this field, others with expertise in other areas, use a range of approaches to investigate the production and distribution of food, social, religious and political factors, medicine and diet, cultural identity and contrasts with neighbouring cultures, and food in literature.

The volume is designed for both Classicists and those interested in the history of food. The aim is both to illuminate and to entertain, and at the same time to remind the reader that the Greeks and Romans were not only philosophers and rulers of empires, they were also peasant farmers, traders and consumers of foods who considered that what and how they ate defined who they were.