Food in America: The Past, Present, and Future of Food, Farming, and the Family Meal 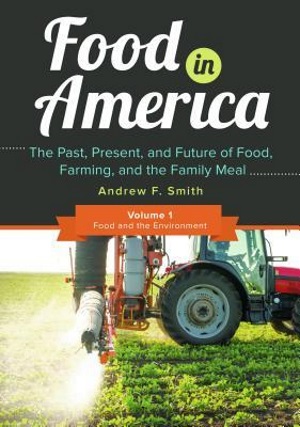 From the publisher: The consumption of fast food and soft drinks, genetically modified foods, and antibiotic-laden foods are just a few of the food controversies that have many Americans concerned. This three-volume work examines all facets of the modern U.S. food system, including the nation’s most important food and agriculture laws, the political forces that shape modern food policy, and the food production trends that are directly impacting the lives of every American family.

Americans are constantly besieged by conflicting messages about food, the environment, and health and nutrition. Are foods with genetically modified ingredients safe? Should we choose locally grown food? Is organic food better than conventional food? Are concentrated animal feed operations destroying the environment? Should food corporations target young children with their advertising and promotional campaigns? This comprehensive three-volume set addresses all of these questions and many more, probing the problems created by the industrial food system, examining conflicting opinions on these complex food controversies, and highlighting the importance of food in our lives and the decisions we make each time we eat.

The coverage of each of the many controversial food issues in the set offers perspectives from different sides to encourage readers to examine various viewpoints and make up their own minds. The first volume, Food and the Environment, addresses timely issues such as climate change, food waste, pesticides, and sustainable foods. Volume two, entitled Food and Health and Nutrition, addresses subjects like antibiotics, food labeling, and the effects of salt and sugar on our health. The third volume, Food and the Economy, tackles topics such as food advertising and marketing, food corporations, genetically modified foods, globalization, and megagrocery chains.

Each volume contains several dozen primary documents that include firsthand accounts written by promoters and advertisers, journalists, politicians and government officials, and supporters and critics of various views related to food and beverages, representing speeches, advertisements, articles, books, portions of major laws, and government documents, to name a few. These documents provide readers additional resources from which to form informed opinions on food issues.

Examines a breadth of contemporary food controversies and offers diverse viewpoints on them, placing these perspectives fairly into a broader historical context. Presents a multidisciplinary approach to the subject of food that highlights related issues in transportation, business, diet and nutrition, public health, the environment, and public policy. Includes primary documents that illuminate important laws, policies, and perspectives on the environmental, public health, and economic impact of food. Provides readers with the latest information about food controversies as well as extensive resources for further study on major food controversies.

Andrew F. Smith has taught food studies courses at the New School University in Manhattan for the past 20 years. He currently teaches courses in American food history, food controversies, and professional food writing. He is the author or editor of 28 books, including Eating History: 30 Turning Points in the Making of American Cuisine; the award-winning Oxford Encyclopedia on Food and Drink in America; Fast Food: The Good, Bad and Hungry; and Greenwood’s Junk Food and Fast Food: An Encyclopedia of What We Love to Eat. He serves as the editor for the “Edible Series” and the “Food Controversies Series” at Reaktion Books in the United Kingdom. Smith has written more than 500 articles in academic journals, popular magazines, and newspapers. He has delivered more than 1,500 presentations on various educational, historical, culinary, and international topics. His media appearances include interviews for National Public Radio, the History Channel, the Food Network, Discovery Channel, and the National Geographic Channel.