Food and Eating in America: A Documentary Reader 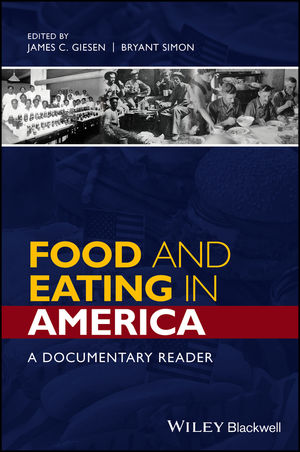 From the publisher: This book features a wide and diverse range of primary sources covering the cultivation, preparation, marketing, and consumption of food from the time before Europeans arrived in North America to the present-day United States. It is organized around what the authors label the “Four P’s”—production, politics, price, and preference—in order to show readers that food represents something more than nutrition and the daily meals that keep us alive. The documents in this book demonstrate that food we eat is a “highly condensed social fact” that both reflects and is shaped by politics, economics, culture, religion, region, race, class, and gender.

Food and Eating in America covers more than 500 years of American food and eating history with sections on: An Appetizer: What Food and Eating Tell Us About America; Hunting, Harvesting, Starving, and the Occasional Feast: Food in Early America; Fields and Foods in the Nineteenth Century; Feeding a Modern World: Revolutions in Farming, Food, and Famine; and Counterculture Cuisines and Culinary Tourism.

Food and Eating in America: A Documentary Reader is an ideal book for students of United States history, food, and the social sciences. It will also appeal to foodies and those with a curiosity for documentary-style books of all kinds.