Fifty Foods That Changed the Course of History 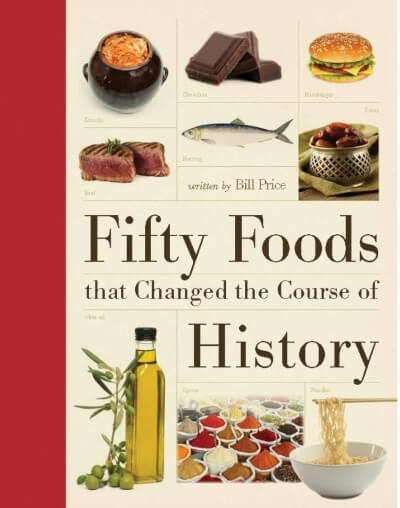 From the publisher: A beautifully presented guide to the foods that have had the greatest impact on human civilization.

Though many of the foods in this book are taken for granted and one (the mammoth) is no longer consumed, these foods have kept humans alive for millennia and theirs is a fascinating story.

Like the other titles in this highly-regarded series, this book organizes the fifty foods into short illustrated chapters of fascinating narratives: the “who, where, when, why and how” of each food’s introduction and its impact on civilization in one or more cultural, social, commercial, political or military spheres.

These stories span human history, from our hunter-gatherer ancestors to the transatlantic slave trade, from the introduction of frozen foods, prohibition and the rise of the Mafia, to the powdered milk scandal in China. Another example is golden rice, the first genetically modified food developed for the good of humanity rather than solely for profit.

Most of the foods are familiar and their importance obvious, such as bread, sugar, wine, potato, beef and rice. Others are far less obvious. The fifty foods include:

Fifty Foods That Changed the Course of History is an informative and entertaining look at how what we eat has made us who we are.

Bill Price is a regular contributor to many international publications and popular reference books. His published works include Tutankhamun: Egypt’s Most Famous Pharaoh and History’s Greatest Decisions.