Feasts and Fasts: A History of Food in India 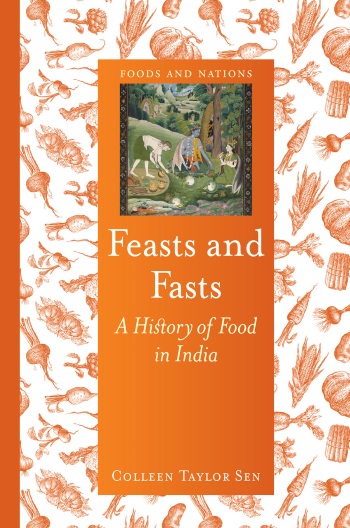 From the publisher: From dal to samosas, paneer to vindaloo, dosa to naan, Indian food is diverse and wide-ranging—unsurprising when you consider India’s incredible range of climates, languages, religions, tribes, and customs. Its cuisine differs from north to south, yet what is it that makes Indian food recognizably Indian, and how did it get that way? To answer those questions, Colleen Taylor Sen examines the diet of the Indian subcontinent for thousands of years, describing the country’s cuisine in the context of its religious, moral, social, and philosophical development.

Exploring the ancient indigenous plants such as lentils, eggplants, and peppers that are central to the Indian diet, Sen depicts the country’s agricultural bounty and the fascination it has long held for foreign visitors.

She illuminates how India’s place at the center of a vast network of land and sea trade routes led it to become a conduit for plants, dishes, and cooking techniques to and from the rest of the world. She shows the influence of the British and Portuguese during the colonial period, and she addresses India’s dietary prescriptions and proscriptions, the origins of vegetarianism, its culinary borrowings and innovations, and the links between diet, health, and medicine. She also offers a taste of Indian cooking itself—especially its use of spices, from chili pepper, cardamom, and cumin to turmeric, ginger, and coriander—and outlines how the country’s cuisine varies throughout its many regions.

Lavishly illustrated with one hundred images, Feasts and Fasts is a mouthwatering tour of Indian food full of fascinating anecdotes and delicious recipes that will have readers devouring its pages.

Colleen Taylor Sen is a food writer and journalist specializing in the cuisine of India. She is the author of Indian Cuisine and Culture and a regular contributor to such publications as Travel and Leisure, Food Arts, the Chicago Sun Times, the Chicago Tribune, and the Globe and Mail.