Feast or Famine: Food and Drink in American Westward Expansion 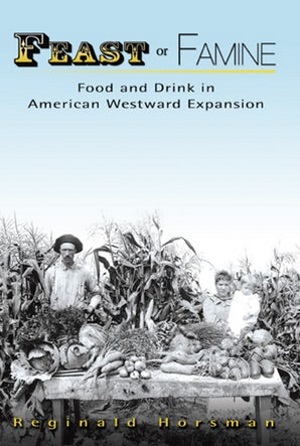 From the publisher: Feast or Famine is the first comprehensive account of food and drink in the winning of the West, describing the sustenance of successive generations of western pioneers. Drawing on journals of settlers and travelers—as well as a lifetime of research on the American West—Reginald Horsman examines more than one hundred years of history, from the first advance of explorers into the Mississippi valley to the movement of ranchers and farmers onto the Great Plains, recording not only the components of their diets but food preparation techniques as well.

Most settlers were able to obtain food beyond the dreams of ordinary Europeans, for whom meat was a luxury. Not only were buffalo, deer, and wild turkey there for the taking, pioneers also gathered greens such as purslane, dandelion, and pigweed—as well as wild fruits, berries, and nuts. They replaced sugar with wild honey or maple syrup, and when they had no tea, they made drinks out of sage, sassafras, and mint. Horsman also reveals the willingness of Indians to convey their knowledge of food to newcomers, sharing salmon in the Pacific Northwest, agricultural crops in the arid Southwest.

Horsman tells how agricultural expansion and transportation opened a veritable cornucopia and how the development of canning soon made it possible for meals to transcend simple frontier foods, with canned oysters and crystallized eggs in airtight cans on merchants’ shelves. He covers food on different regional frontiers, as well as the cuisines of particular groups such as fur traders, soldiers, miners, and Mormons. He also discusses food shortages that resulted from poor preparation, temporary scarcity of game, marginal soil, or simply bad luck. At times, as with the ill-fated Donner Party, pioneers starved.

Engagingly written and meticulously researched, Feast or Famine is a one-of-a-kind look at a subject too long ignored in histories of the West. By revealing the spectrum of frontier fare across years and regions, it shows us that the land of opportunity was often a land of plenty.

Reginald Horsman is Distinguished Professor of History Emeritus at the University of Wisconsin–Milwaukee and author of eleven other books, including Frontier Doctor: William Beaumont, America’s First Great Medical Scientist (University of Missouri Press) and, most recently, The New Republic: The United States of America, 1789–1815.