Feast: Food of the Islamic World 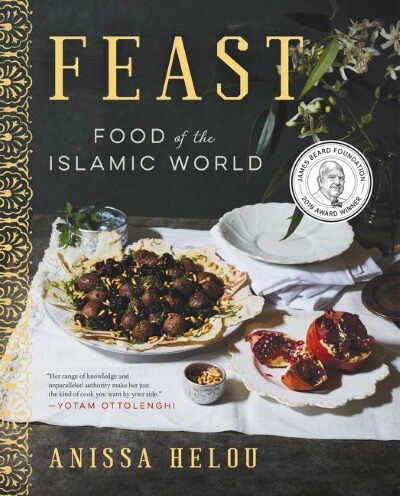 From the publisher: In Feast, award-winning chef Anissa Helou—an authority on the cooking of North Africa, the Mediterranean, and the Middle East—shares her extraordinary range of beloved, time-tested recipes and stories from cuisines throughout the Muslim world.

Helou has lived and traveled widely in this region, from Egypt to Syria, Iran to Indonesia, gathering some of its finest and most flavorful recipes for bread, rice, meats, fish, spices, and sweets. With sweeping knowledge and vision, Helou delves into the enormous variety of dishes associated with Arab, Persian, Mughal (or South Asian), and North African cooking, collecting favorites like biryani or Turkish kebabs along with lesser known specialties such as Zanzibari grilled fish in coconut sauce or Tunisian chickpea soup. Suffused with history, brought to life with stunning photographs, and inflected by Helou’s humor, charm, and sophistication, Feast is an indispensable addition to the culinary canon featuring some of the world’s most inventive cultures and peoples.

Anissa Helou is a writer, journalist, and broadcaster. Born and raised in Beirut, Lebanon, she knows the Mediterranean as only a well-traveled native can. Lebanese Cuisine, her first book, was nominated for the prestigious Andre Simon Award and was named one of the best cookbooks of 1998 by the Los Angeles Times. Mediterranean Street Food was described by the New York Times as “a marvelous book.” It won the Gourmand World Cookbook Award 2002 as the best Mediterranean cuisine book in English. Helou lives in London, where she has her own cooking school, Anissa’s School.