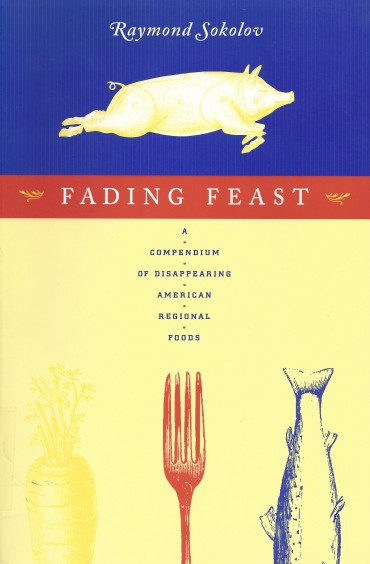 by Raymond A. Sokolov

From the publisher: In the early 1980s, on assignment from the American Museum of Natural History, Raymond Sokolov crisscrossed America in search of traditional regional cuisines. He traveled from Maine to California, returning with a cornucopia of recipes that few at the time seemed anxious to maintain- recipes such as boudin blanc, persimmon fudge, and, for the truly adventurous, roast bear paws.

The resulting essays, here collected, were intended to describe and preserve these vanishing, quintessential American foods. Since its first publication, however, Fading Feast has proven to be not a farewell, but the forerunner of renewed interest in these regional treasures. Written with panache and passion – and featuring a dozen essays not included in the original version—this new edition is as timely and entertaining now as when Sokolov first set out to record our native culinary customs.

Raymond Sokolov was writing about all the fresh, local things that America’s burgeoning gourmand culture now embraces back in the days when the term “foodie” was a mere misspeak and the average American had never heard of Virginia persimmons or sunchokes or foraged fiddleheads. After graduating from Harvard University, Sokolov wrote for New York Times, which made him restaurant critic and food editor in 1973. He also wrote the dining column for The Wall Street Journal from 2006 to 2010. His biggest impact on food writing, however, was not his restaurant reviews but his column “A Matter of Taste” for the American Museum of Natural History’s magazine Natural History. “A Matter of Taste” concerned not just the taste of food but the culture and and traditions that surround it, and helped revitalize interest in American regional foodways.