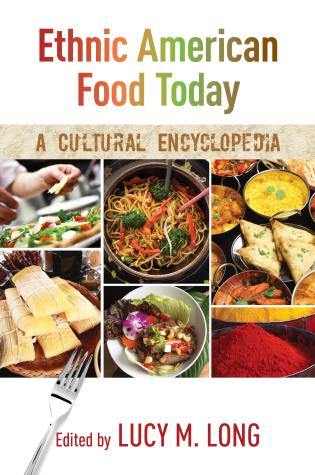 From the publisher: Ethnic American Food Today introduces readers to the myriad ethnic food cultures in the U.S. today. Entries are organized alphabetically by nation and present the background and history of each food culture along with explorations of the place of that food in mainstream American society today.

Many of the entries draw upon ethnographic research and personal experience, giving insights into the meanings of various ethnic food traditions as well as into what, how, and why people of different ethnicities are actually eating today.

The entries look at foodways—the network of activities surrounding food itself—as well as the beliefs and aesthetics surrounding that food, and the changes that have occurred over time and place. They also address stereotypes of that food culture and the culture’s influence on American eating habits and menus, describing foodways practices in both private and public contexts, such as restaurants, groceries, social organizations, and the contemporary world of culinary arts. Recipes of representative or iconic dishes are included. This timely two-volume encyclopedia addresses the complexity—and richness—of both ethnicity and food in America today.

Lucy M. Long, PhD, is a folklorist and founder and director of the Center for Food and Culture, Bowling Green, OH. She has published extensively on cultural aspects of food and foodways, including the books Culinary Tourism (2004) and Regional American Food Culture (2009), and produced documentary videos, museum exhibits, and educational programs and materials on that subject. She is an adjunct assistant professor at Bowling Green State University, where she has taught food studies courses since 1998 in departments of Popular Culture, American Culture Studies, International Studies, and Tourism.