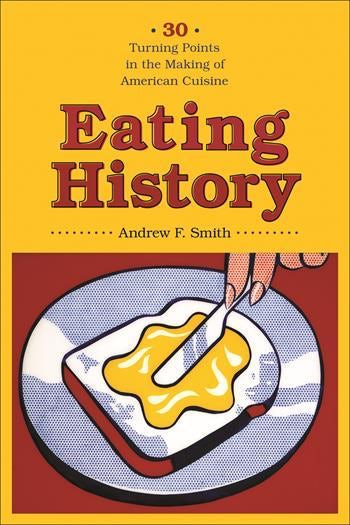 From the publisher: Food expert and celebrated food historian Andrew F. Smith recountsin delicious detailthe creation of contemporary American cuisine. The diet of the modern American wasn’t always as corporate, conglomerated, and corn-rich as it is today, and the style of American cooking, along with the ingredients that compose it, has never been fixed. With a cast of characters including bold inventors, savvy restaurateurs, ruthless advertisers, mad scientists, adventurous entrepreneurs, celebrity chefs, and relentless health nuts, Smith pins down the truly crackerjack history behind the way America eats.

Smith’s story opens with early America, an agriculturally independent nation where most citizens grew and consumed their own food. Over the next two hundred years, however, Americans would cultivate an entirely different approach to crops and consumption. Advances in food processing, transportation, regulation, nutrition, and science introduced highly complex and mechanized methods of production. The proliferation of cookbooks, cooking shows, and professionally designed kitchens made meals more commercially, politically, and culturally potent. To better understand these trends, Smith delves deeply and humorously into their creation. Ultimately he shows how, by revisiting this history, we can reclaim the independent, locally sustainable roots of American food.

Andrew F. Smith teaches food studies at the New School University in New York City. He has published more than three hundred articles on food and food history and has authored or edited seventeen books, including Starving the South: How the North Won the Civil War and the Oxford Encyclopedia on Food and Drink in America. Smith has also appeared on television shows airing on PBS, the History Channel, and the Food Network.