Duncan Hines: How a Traveling Salesman Became the Most Trusted Name in Food 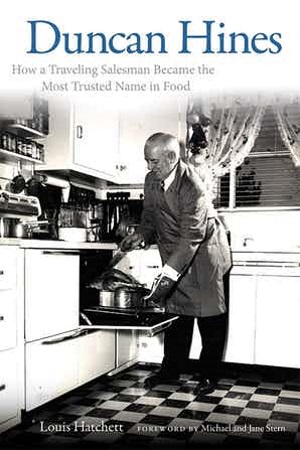 From the publisher: Duncan Hines (1880–1959) may be best known for the cake mixes, baked goods, and bread products that bear his name, but most people forget that he was a real person and not just a fictitious figure invented for the brand. America’s pioneer restaurant critic, Hines discovered his passion while working as a traveling salesman during the 1920s and 1930s — a time when food standards were poorly enforced and safety was a constant concern. He traveled across America discovering restaurants and offering his recommendations to readers in his best-selling compilation Adventures in Good Eating (1935). The success of this work and of his subsequent publications led Hines to manufacture the extremely popular food products that we still enjoy today.

In Duncan Hines, author Louis Hatchett explores the story of the man, from his humble beginnings in Bowling Green, Kentucky, to his lucrative licensing deal with Proctor & Gamble. Following the successful debut of his restaurant guide, Hines published his first cookbook, Adventures in Good Cooking (1939), at the age of 59 and followed it with The Dessert Book (1955). These culinary classics included recipes from many of the establishments he visited on his travels, favorites handed down through his family for generations, and new dishes that contained unusual ingredients for the era. Many of the recipes served as inspiration for mixes that eventually became available under the Duncan Hines brand.

This authoritative biography is a comprehensive account of the life and legacy of a savvy businessman, American icon, and an often-overlooked culinary pioneer whose love of good food led to his name becoming a grocery shelf favorite. Hatchett offers insightful commentary into the man behind the cake mix boxes and how he paved the way for many others like him.

Louis Hatchett is the editor of Mencken’s Americana and The Continuing Crisis: As Chronicled for Four Decades by R. Emmett Tyrrell, Jr.

The University Press of Kentucky, 2014