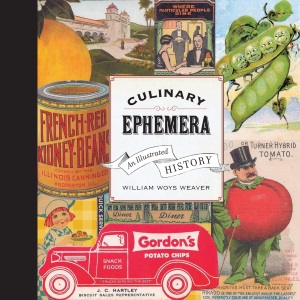 From the publisher: This extraordinary collection, a trove of enchanting designs, appealing colors, and forgotten motifs that stir the imagination, features an unprecedented assortment of ephemera, or paper collectibles, related to food. It includes images of postcards, match covers, menus, labels, posters, brochures, valentines, packaging, advertisements, and other materials from nineteenth- and twentieth-century America.

Internationally acclaimed food historian William Woys Weaver takes us on a lively tour through this dazzling collection in which each piece tells a new story about food and the past. Packed with fascinating history, the volume is the first serious attempt to organize culinary ephemera into categories, making it useful for food lovers, collectors, designers, and curators alike.

Much more than a catalog, Culinary Ephemera follows this paper trail to broader themes in American social history such as diet and health, alcoholic beverages, and Americans abroad. It is a collection that, as Weaver notes, will “transport us into the vicarious worlds of dinners past, brushing elbows with the reality of another time, another place, another human condition.”

William Woys Weaver is Director of the Keystone Center for the Study of Regional Foods and Food Tourism. He has written fourteen books, including Heirloom Vegetable Gardening and Pennsylvania Dutch Country Cooking, both of which received Julia Child awards. A contributing editor to Gourmet, Weaver has also served as Associate Editor and Art Editor for The Encyclopedia of Food and Culture. He has appeared on many national programs, including “Good Morning America” and NPR’s “Fresh Air.”