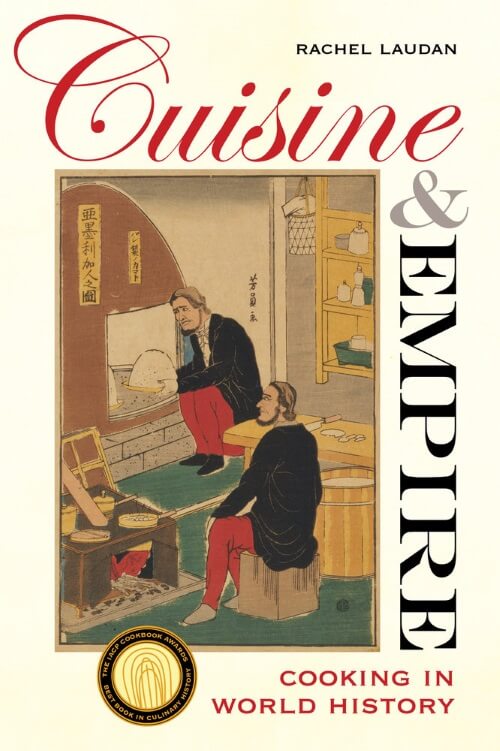 From the publisher: Rachel Laudan tells the remarkable story of the rise and fall of the world’s great cuisines—from the mastery of grain cooking some twenty thousand years ago, to the present—in this superbly researched book. Probing beneath the apparent confusion of dozens of cuisines to reveal the underlying simplicity of the culinary family tree, she shows how periodic seismic shifts in “culinary philosophy”—beliefs about health, the economy, politics, society and the gods—prompted the construction of new cuisines, a handful of which, chosen as the cuisines of empires, came to dominate the globe.

Cuisine and Empire shows how merchants, missionaries, and the military took cuisines over mountains, oceans, deserts, and across political frontiers. Laudan’s innovative narrative treats cuisine, like language, clothing, or architecture, as something constructed by humans. By emphasizing how cooking turns farm products into food and by taking the globe rather than the nation as the stage, she challenges the agrarian, romantic, and nationalistic myths that underlie the contemporary food movement.

Rachel Laudan is the prize-winning author of The Food of Paradise: Exploring Hawaii’s Culinary Heritage and a coeditor of the Oxford Companion to the History of Modern Science.