Corn and Capitalism: How a Botanical Bastard Grew to Global Dominance 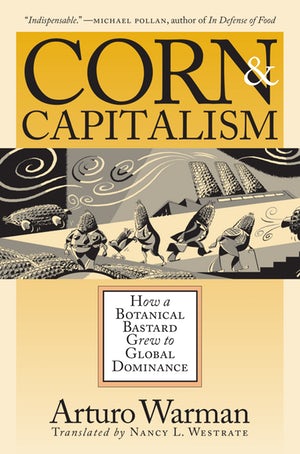 by Arturo Warman and translated by Nancy L. Westrate

From the publisher: Exploring the history and importance of corn worldwide, Arturo Warman traces its development from a New World food of poor and despised peoples into a commodity that plays a major role in the modern global economy.

The book, first published in Mexico in 1988, combines approaches from anthropology, social history, and political economy to tell the story of corn, a “botanical bastard” of unclear origins that cannot reseed itself and is instead dependent on agriculture for propagation. Beginning in the Americas, Warman depicts corn as colonizer. Disparaged by the conquistadors, this Native American staple was embraced by the destitute of the Old World. In time, corn spread across the globe as a prodigious food source for both humans and livestock. Warman also reveals corn’s role in nourishing the African slave trade.

Through the history of one plant with enormous economic importance, Warman investigates large-scale social and economic processes, looking at the role of foodstuffs in the competition between nations and the perpetuation of inequalities between rich and poor states in the world market. Praising corn’s almost unlimited potential for future use as an intensified source of starch, sugar, and alcohol, Warman also comments on some of the problems he foresees for large-scale, technology-dependent monocrop agriculture.

The late Arturo Warman was an anthropologist and the former minister of agrarian reform in Mexico.