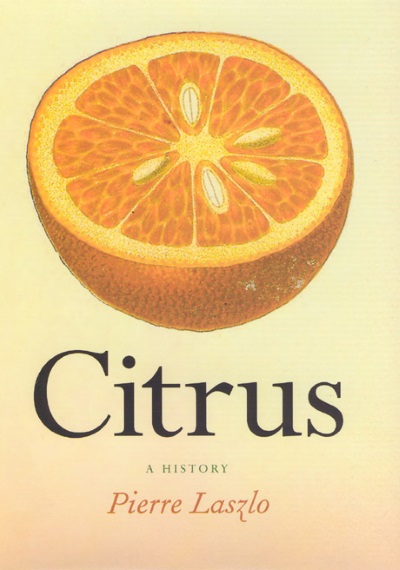 From the publisher: Walk into your local grocery store and down the produce aisle, and you’ll find a dazzling array of citrus, from navel oranges and clementines to grapefruit and key limes—and sometimes even more exotic fare like the Japanese yuzu or the baboon lemon. Nearly 100 million tons of citrus are produced globally every year, but where did these fruits first come from? How did they find their way into the Western world? And how did they become both a culinary and cultural phenomenon?

Pierre Laszlo here traces the spectacular rise and spread of citrus across the globe: from Southeast Asia in 4000 BC through North Africa and the Roman Empire to early modern Spain and Portugal, whose explorers introduced the fruits to the Americas during the 1500s. Blending scientific rigor with personal curiosity, Citrus ransacks over two millennia of world history, exploring the numerous roles that citrus has played in agriculture, horticulture, cooking, nutrition, religion, and art—from the Jewish feast of the Tabernacles through the gardens and courts of Versailles to the canvasses of Vincent van Gogh to the orange groves of southern California and the juicing industry of today.

Pierre Laszlo is professor emeritus of chemistry at the University of Liège and the École Polytechnique. He is the author of numerous works, among them Salt: Grain of Life.