Christmas Food and Feasting: A History 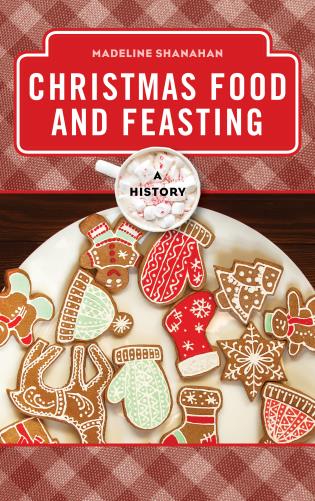 From the publisher: From its pre-Christian origins to the present, food has always been central to Christmas; a feast at which tradition, nostalgia, innovation, symbolism, and indulgence all come together at the table.

This book explores the rich story of Christmas food and feasting, tracing the history of how our festive menu evolved and inherited elements of pagan ritual, medieval traditions, early modern innovations, Victorian romanticism, and contemporary commercialism. Although it makes reference to global traditions, it focuses specifically on the story of how the British Christmas meal evolved, both on its native shores and beyond. It considers the origins, form, and structure of the modern British Christmas dinner, with its codified menu and iconic festive dishes and drinks.

It also tells the story of what happened to that meal as it was taken throughout the Empire, becoming entrenched in places most strongly associated with the British Diaspora. In these places, spread across the Globe, keeping a very precise model of Christmas became a key marker of cultural identity. This British Christmas was not unchanging, though; rather, it adapted to new environments, and merged with the Christmases of other cultures encountered to create new traditions. Looking beyond Britain, to places strongly associated with its Diaspora, such as the United States of America, Canada, Australia, and New Zealand, helps us to understand the cultural significance and meaning of this feast with more complexity. With recipes and menus, this work will help modern readers understand the feasts of Christmas past, and perhaps incorporate some of those old dishes into Christmas-present festivities.

Madeline Shanahan, PhD, has worked as a professional historian and archaeologist in Dublin, Sydney and Melbourne and is the author of a range of peer-reviewed publications. Among the most notable of these is her first book, Manuscript Recipe Books as Archaeological Objects: Text and Food in the Early Modern World (Lexington, 2015) and a paper published in Food in Ireland, Proceedings of The Royal Irish Academy (2015) which was awarded a Highly Commended in the 2015 Sophie Coe Prize.