Chopsticks: A Cultural and Culinary History 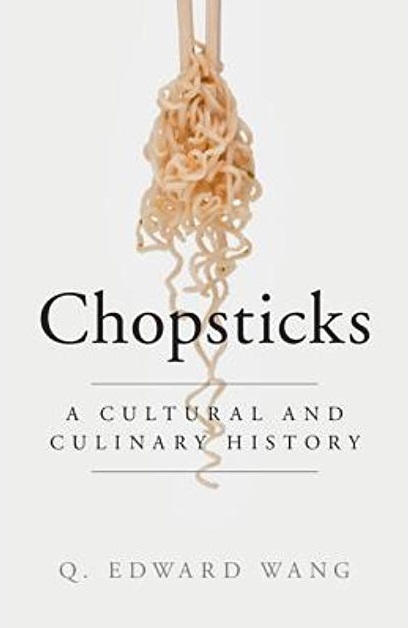 From the publisher: Chopsticks have become a quintessential part of the Japanese, Chinese and Korean culinary experience across the globe, with more than one fifth of the world’s population using them daily to eat. In this vibrant, highly original account of the history of chopsticks, Q. Edward Wang charts their evolution from a simple eating implement in ancient times to their status as a much more complex, cultural symbol today.

Opening in the Neolithic Age, at the first recorded use of chopsticks, the book surveys their practice through Chinese history, before exploring their transmission in the fifth century to other parts of Asia, including Vietnam, Korea, Japan and Mongolia. Calling upon a striking selection of artwork, the author illustrates how chopstick use has influenced Asian cuisine, and how, in turn the cuisine continues to influence chopstick use, both in Asia and across the globe.

Edward Wang is Professor of History and Co-ordinator of Asian Studies at Rowan University and Changjiang Professor of History at Peking University. Educated in both China and the US, he has received a fellowship from the Institute for Advanced Study, Princeton, and the Chinese Studies Fellowship from the National Library, Taiwan. He has given lectures and talks at a number of institutions in North America, Europe and Asia, and has been Secretary General of the International Commission for the History and Theory of Historiography since 2005. His recent publications include Mirroring the Past: The Writing and Use of History in Imperial China (co-authored), which was a Choice Outstanding Academic Title in 2006, and A Global History of Modern Historiography (co-authored), which has been translated into Chinese, German, Greek and Russian.