Chop Suey and Sushi from Sea to Shining Sea: Chinese and Japanese Restaurants in the United States 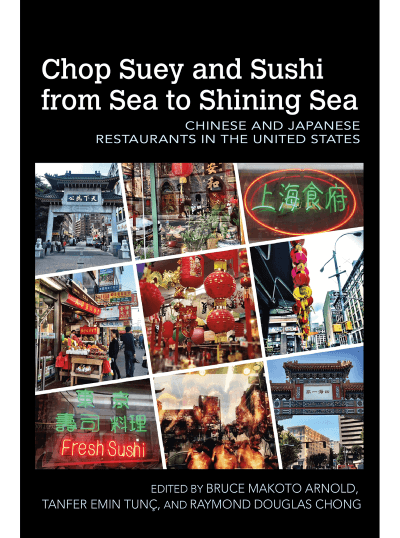 From the publisher: The essays in Chop Suey and Sushi from Sea to Shining Sea fill gaps in the existing food studies by revealing and contextualizing the hidden, local histories of Chinese and Japanese restaurants in the United States.

The writer of these essays show how the taste and presentation of Chinese and Japanese dishes have evolved in sweat and hardship over generations of immigrants who became restaurant owners, chefs, and laborers in the small towns and large cities of America. These vivid, detailed, and sometimes emotional portrayals reveal the survival strategies deployed in Asian restaurant kitchens over the past 150 years and the impact these restaurants have had on the culture, politics, and foodways of the United States.

Some of these authors are family members of restaurant owners or chefs, writing with a passion and richness that can only come from personal investment, while others are academic writers who have painstakingly mined decades of archival data to reconstruct the past. Still others offer a fresh look at the amazing continuity and domination of the “evil Chinaman” stereotype in the “foreign” world of American Chinatown restaurants. The essays include insights from a variety of disciplines, including history, sociology, anthropology, ethnography, economics, phenomenology, journalism, food studies, and film and literary criticism.

Chop Suey and Sushi from Sea to Shining Sea not only complements the existing scholarship and exposes the work that still needs to be done in this field, but also underscores the unique and innovative approaches that can be taken in the field of American food studies.

Bruce Makoto Arnold is a historian specializing in American and Asian cultural history, particularly the areas of childhood, education, and foodways. He is assistant professor of education and childhood history at the Ohio State University in Columbus, Ohio. Bruce Makoto Arnold’s website.

Tanfer Emin Tunç is an associate professor in the department of American Culture and Literature at Hacettepe University, Ankara,Turkey. She specializes in American social history, cultural studies, women’s and gender studies, and transnational American studies.

Raymond Douglas Chong is president of Generations, LLC in Sugar Land, Texas. He is a sixth generation American Born Chinese. He writes stories, poems, and songs, and he is a filmmaker.