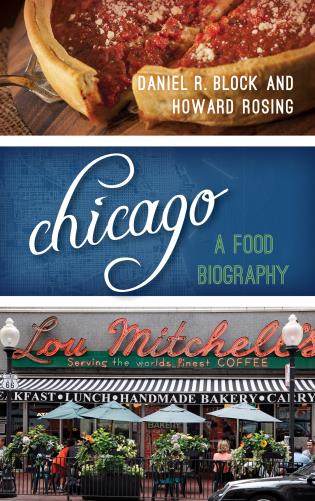 by Daniel R. Block and Howard B. Rosing

From the publisher: Chicago began as a frontier town on the edge of white settlement and as the product of removal of culturally rich and diverse indigenous populations. The town grew into a place of speculation with the planned building of the Illinois and Michigan canal, a boomtown, and finally a mature city of immigrants from both overseas and elsewhere in the US. In this environment, cultures mixed, first at the taverns around Wolf Point, where the forks of the Chicago River join, and later at the jazz and other clubs along the “Stroll” in the black belt, and in the storefront ethnic restaurants of today. Chicago was the place where the transcontinental railroads from the West and the “trunk” roads from the East met. Many downtown restaurants catered specifically to passengers transferring from train to train between one of the five major downtown railroad stations. This also led to “destination” restaurants, where Hollywood stars and their onlookers would dine during overnight layovers between trains. At the same time, Chicago became the candy capital of the US and a leading city for national conventions, catering to the many participants looking for a great steak and atmosphere.

Beyond hosting conventions and commerce, Chicagoans also simply needed to eat—safely and relatively cheaply. Chicago grew amazingly fast, becoming the second largest city in the US in 1890. Chicago itself and its immediate surrounding area was also the site of agriculture, both producing food for the city and for shipment elsewhere. Within the city, industrial food manufacturers prospered, highlighted by the meat processors at the Chicago stockyards, but also including candy makers such as Brach’s and Curtiss, and companies such as Kraft Foods. At the same time, large markets for local consumption emerged. The food biography of Chicago is a story of not just culture, economics, and innovation, but also a history of regulation and regulators, as they protected Chicago’s food supply and built Chicago into a city where people not only come to eat, but where locals rely on the availability of safe food and water. With vivid details and stories of local restaurants and food, Block and Rosing reveal Chicago to be one of the foremost eating destinations in the country.

Daniel R. Block, PhD, is a professor of geography and director of the Fred Blum Neighborhood Assistance Center at Chicago State University. He has particular interests in inner-city food access issues, the history of the modern food system, and Chicago food history and policy. He has completed a number of food access studies, including the Northeastern Illinois Community Food Security Assessment, a large scale food access study of the six-county Chicago metro area. In addition, Block is currently on the board of the Chicago Food Policy Advisory Council, has been a member many community commissions on food access issues, is a past president of the Agriculture, Food, and Human Values Society and was the founding chair of the Geographies of Food and Agriculture Specialty Group of the Association of American Geographers.

Howard Rosing, PhD, is a cultural anthropologist whose research focuses on urban food access, economic restructuring, community food systems, and food justice movements in Chicago and the Dominican Republic. He is theExecutive Director of the Steans Center for Community-based Service Learning and Community Service Studies at DePaul University and co-director of DePaul’s graduate program in Sustainable Urban Development (SUD). Rosing teaches courses on community food systems and food justice and his current research focuses on the role of urban agriculture in improving food access in economically distressed neighborhoods. He is also co-developer of the Chicago Urban Agriculture Mapping Project (cuamp.org), a public resource for documenting the city’s food production.