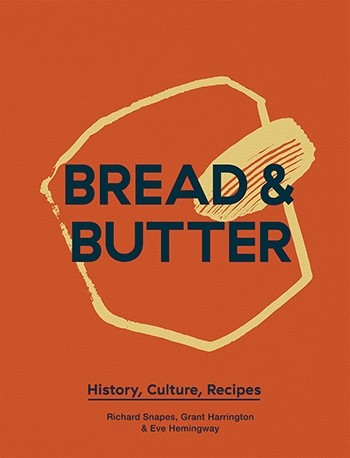 From the publisher: Bread and butter were first recorded as being eaten together in 1492, and the marriage has been solid and loving ever since. Bread & Butter: History, Culture, Recipes is a celebration of a divine partnership and a love letter to two glorious, artisanal products that have graced our tables for centuries. The book delves deeply into the history and culture behind the bread and butter partnership, taking a global overview that brings us to the present day. It also shares 40 outstanding recipes that celebrate the best of both bread and butter.

Eve Hemingway is a food writer who strives to preserve old food cultures. She believes that without books and essays to promote the hard work of specialist food producers, we’re at risk of losing the knowledge and skills they devote their lives to. She currently works for a company that supports restaurants to reduce food waste.

Richard Snapes of The Snapery Bakery believes that even the best can be improved. A philosophy that has cemented a life-long pursuit: to make the best bread anyone has ever eaten. He launched his London-based bakery in 2014 and now supplies bread toestablishments including José Pizarro restaurants.

Grant Harrington of Ampersand Cultured Butter is on a mission to make butter taste more buttery. He makes artisan cultured butter, buttermilk, and fresh cheeses and has supplied over 15 Michelin-starred restaurants with his buttery delights. He was previously a chef at Gordon Ramsay’s Maze and Pétrus, a private chef for the Duke of Westminster and pastry chef at Fäviken, Sweden.