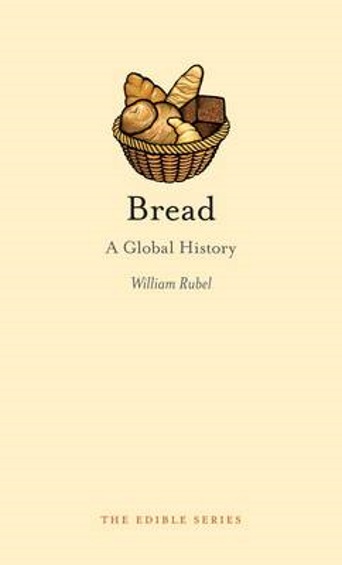 From the publisher: What food is more basic, more essential and more universal than bread? Common to the diets of both rich and poor, bread is one of our oldest foods. Loaves and rolls have been found in ancient Egyptian tombs, and have been excavated from ovens in Pompeii that were buried when Vesuvius erupted in AD 79. From the sixteenth-century English peasants’ bread made with pea flour and rye, to the grain-wasting, pure white bread of the French court, from the crusty sourdough loaf made by artisan bakers to the doughy ‘sliced white’ found in every supermarket, there is a bread for every time and place in history.

William Rubel takes us on a journey to discover breads around the world, from Mexican pan dulce to French baguettes and German pumpernickel, and shows how the kind of bread you eat reveals who you are. He also describes the techniques of bread-making, from ancient recipes leavened with brewers’ yeast to the factory-made sandwich loaf. Containing a glossary of over one hundred different breads from around the world, Bread will be an inspiration for all bakers, as well as anyone who enjoys a simple slice.

William Rubel is a freelance food historian and the author of The Magic of Fire: Cooking on the Open Hearth.