Black Rice: The African Origins of Rice Cultivation in the Americas 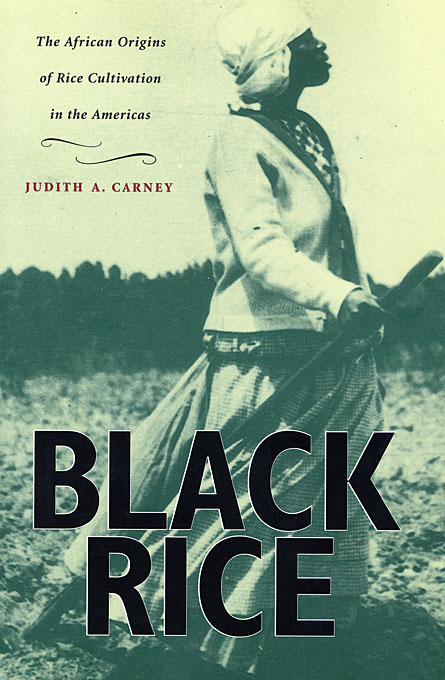 by Judith A. Carney

From the publisher: Few Americans identify slavery with the cultivation of rice, yet rice was a major plantation crop during the first three centuries of settlement in the Americas. Rice accompanied African slaves across the Middle Passage throughout the New World to Brazil, the Caribbean, and the southern United States. By the middle of the eighteenth century, rice plantations in South Carolina and the black slaves who worked them had created one of the most profitable economies in the world.

Black Rice tells the story of the true provenance of rice in the Americas. It establishes, through agricultural and historical evidence, the vital significance of rice in West African society for a millennium before Europeans arrived and the slave trade began. The standard belief that Europeans introduced rice to West Africa and then brought the knowledge of its cultivation to the Americas is a fundamental fallacy, one which succeeds in effacing the origins of the crop and the role of Africans and African-American slaves in transferring the seed, the cultivation skills, and the cultural practices necessary for establishing it in the New World.

In this vivid interpretation of rice and slaves in the Atlantic world, Judith Carney reveals how racism has shaped our historical memory and neglected this critical African contribution to the making of the Americas.

Judith A. Carney is Professor of Geography at the University of California, Los Angeles.