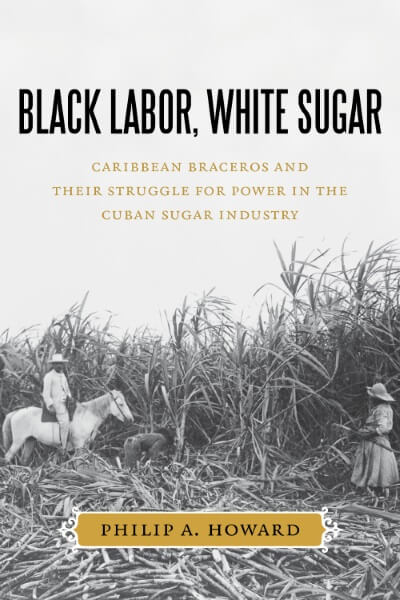 by Philip A. Howard

From the publisher: Early in the twentieth century, the Cuban sugarcane industry faced a labor crisis when Cuban and European workers balked at the inhumane conditions they endured in the cane fields. Rather than reforming their practices, sugar companies gained permission from the Cuban government to import thousands of black workers from other Caribbean colonies, primarily Haiti and Jamaica. Black Labor, White Sugar illuminates the story of these immigrants, their exploitation by the sugarcane companies, and the strategies they used to fight back.

Philip A. Howard traces the socioeconomic and political circumstances in Haiti and Jamaica that led men to leave their homelands to cut, load, and haul sugarcane in Cuba. Once there, the field workers, or braceros, were subject to marginalization and even violence from the sugar companies, which used structures of race, ethnicity, color, and class to subjugate these laborers.

Howard argues that braceros drew on their cultural identities—from concepts of home and family to spiritual worldviews—to interpret and contest their experiences in Cuba. They also fought against their exploitation in more overt ways. As labor conditions worsened in response to falling sugar prices, the principles of anarcho-syndicalism converged with the Pan-African philosophy of Marcus Garvey to foster the evolution of a protest culture among black Caribbean laborers. By the mid-1920s, this identity encouraged many braceros to participate in strikes that sought to improve wages as well as living and working conditions.

The first full-length exploration of Haitian and Jamaican workers in the Cuban sugarcane industry, Black Labor, White Sugar examines the industry’s abuse of thousands of black Caribbean immigrants, and the braceros’ answering struggle for power and self-definition.

Philip A. Howard is associate professor of Latin American and Caribbean history at the University of Houston. He is the author of Changing History: Afro-Cuban Cabildos and Societies of Color in the Nineteenth Century.