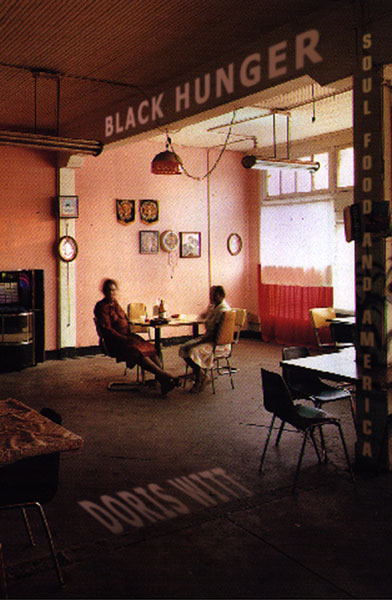 From the publisher: In 1889, the owners of a pancake mix witnessed the vaudeville performance of a white man in blackface and drag playing a character called Aunt Jemima. This character went on to become one of the most pervasive stereotypes of black women in the United States, embodying not only the pancakes she was appropriated to market but also post–Civil War race and gender hierarchies—including the subordination of African American women as servants and white fantasies of the nurturing mammy.

Using the history of Aunt Jemima as a springboard for exploring the relationship between food and African Americans, Black Hunger focuses on debates over soul food since the 1960s to illuminate a complex web of political, economic, religious, sexual, and racial tensions between whites and blacks and within the black community itself. Celebrated by many African Americans as a sacramental emblem of slavery and protest, soul food was simultaneously rejected by others as a manifestation of middle-class black “slumming.”

Highlighting the importance of food for men as well as women, Doris Witt traces the promotion of soul food by New York Times food writer Craig Claiborne and its prohibition by Nation of Islam leader Elijah Muhammad and comedian-turned-diet guru Dick Gregory. A discussion of cookbook author Vertamae Grosvenor, who distanced herself from the myth of plantation mammy by reimagining soul food as “vibration cooking,” sets the stage for Witt’s concluding argument that the bodies and appetites of African American women should be viewed as central to contemporary conversations about eating disorders and reproductive rights.

Witt draws on vaudeville, literature, film, visual art, and cookbooks to explore how food has been used both to perpetuate and to challenge racial stereotypes. Raising her fist in a Black Power salute, wielding her spatula like a sword, Aunt Jemima steps off the pancake box in a righteous fury.

Doris Witt is associate professor of English at the University of Iowa.