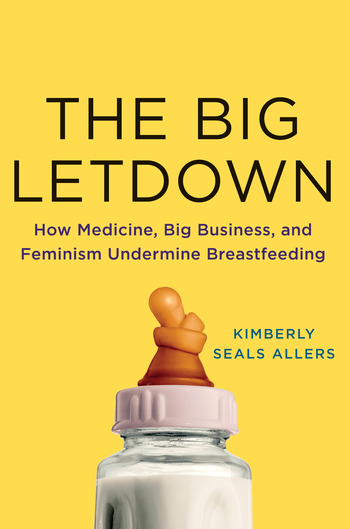 From the publisher: Pediatricians say you should but it’s okay if you don’t. The hospital says, “Breast is best,” but sends you home with formula “just in case.” Your sister-in-law says, “Of course you should!” Your mother says, “I didn’t, and you turned out just fine.” Celebrities are photographed nursing in public, yet breastfeeding mothers are asked to cover up in malls and on airplanes. Breastfeeding is a private act, yet everyone has an opinion about it. How did feeding our babies get so complicated?

Journalist and infant health advocate Kimberly Seals Allers breaks breastfeeding out of the realm of “personal choice” and shows our broader connection to an industrialized food system that begins at birth, the fallout of feminist ideals, and the federal policies that are far from family friendly. The Big Letdown uncovers the multibillion-dollar forces battling to replace mothers’ milk and the failure of the medical establishment to protect infant health.

Weaving together research and personal stories with original reporting on medicine, big pharma, and hospitals, Kimberly Seals Allers shows how mothers and babies have been abandoned by all the forces that should be supporting families from the start–and what we can do to help.
l for history of technology classes, food studies classes, or anyone interested in what daily life in the United States was like between 1880 and 1930.

Kimberly Seals Allers is an award-winning journalist, and leading breastfeeding commentator. Her work has been featured in the New York Times, Huffington Post, The Daily Beast, CNN.com, Ladies Home Journal, The New York Daily News, Real Simple, Fortune, Pregnancy and many others. She has appeared on Good Morning America, CNN, Anderson Cooper, Fox News and the Huckabee Show and NPR. Kimberly worked at Fortune, Essence, New York Post and The Times (of London), before turning to freelance work. She is the author of The Mocha Manual® series of books and the co-author of Giving Notice: Why the Best and Brightest are Leaving the Workplace.