Beyond Bratwurst A History of Food in Germany 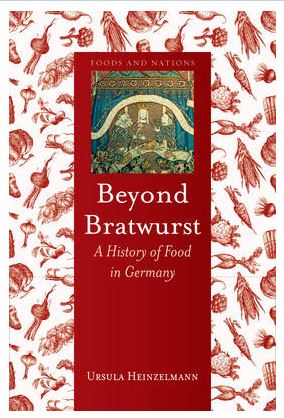 Ask about German food and most people think of beer and sausage, or pretzels and Limburger cheese. However, the 82 million inhabitants of modern-day Germany do not all live exclusively on Oktoberfest fare. In fact, as in most modern countries, Germans have a long tradition of taking outside influences into their cuisine, and there is a wide variety of food eaten within the various regions of the country.

Beyond Bratwurst traces the many traditions that have combined to form German food today. From their earliest beginnings, food and cooking in Germany have been marked by geographic and climatic differences between north and south, as well as continuous cultural influences from bordering countries. The book shows that the openness and receptiveness Germans have shown towards these influences have resulted in the frequent reinvention of their cuisine, and a food culture with a remarkable flexibility. The regional variations of today are based as much on political, cultural and socioeconomic history as on geography: the story of German food includes the back-to-the-land movement of the late nineteenth century and the development of modern mass-market products by Justus von Liebig and Dr Oetker, as well as rationing and shortages under the Nazis, post-war hunger and divisions between East and West.

Beyond Bratwurst describes who eats what, how, where and when in Germany, telling the stories of many German specialities such as beer, stollen, rye bread and lebkuchen, as well as more surprising German favourites.