Bananas and Business: The United Fruit Company in Columbia, 1899-2000 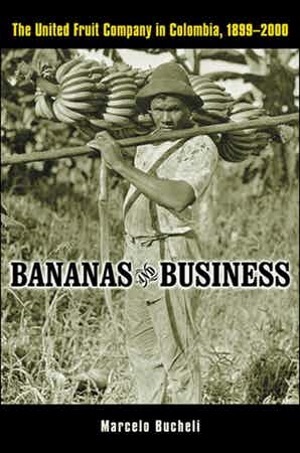 From the publisher: For well over a century, the United Fruit Company (UFCO) has been the most vilified multinational corporation operating in Latin America. Criticism of the UFCO has been widespread, ranging from politicians to consumer activists, and from labor leaders to historians, all portraying it as an overwhelmingly powerful corporation that shaped and often exploited its host countries.

In this first history of the UFCO in Colombia, Marcelo Bucheli argues that the UFCO’s image as an all-powerful force in determining national politics needs to be reconsidered. Using a previously unexplored source—the internal archives of Colombia’s UFCO operation—Bucheli reveals that before 1930, the UFCO worked alongside a business-friendly government that granted it generous concessions and repressed labor unionism. After 1930, however, the country experienced dramatic transformations including growing nationalism, a stronger labor movement, and increasing demands by local elites for higher stakes in the banana export business.

In response to these circumstances, the company abandoned production, selling its plantations (and labor conflicts) to local growers, while transforming itself into a marketing company. The shift was endorsed by the company’s shareholders and financial analysts, who preferred lower profits with lower risks, and came at a time in which the demand for bananas was decreasing in America. Importantly, Bucheli shows that the effect of foreign direct investment was not unidirectional. Instead, the agency of local actors affected corporate strategy, just as the UFCO also transformed local politics and society.