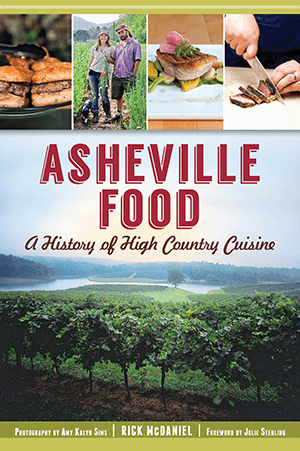 From the publisher: Thirty years ago, the mountain city of Asheville was known for little more than the Biltmore Estate. Since then, the sleepy town has become a nationally recognized food mecca, a hot spot for food celebrities and a bustling hub of microbreweries. Food historian and author Rick McDaniel traces the rise of the Asheville food scene from its early eateries to the pioneering chefs who put Asheville on the culinary map and the new generation of stars who command the kitchens at the city’s hottest new restaurants.

A founding city of the farm-to-table movement, Asheville is proud of its local food and drink, appearing on creative menus throughout the city and in the pages of the national food media. Join McDaniel as he embarks on a mouthwatering journey to explore the farmers, chefs, markets and history that have shaped Asheville’s rich food heritage.

Rick McDaniel is a food historian, chef and journalist. He has contributed to the Asheville Citzen-Times and wrote An Irresitible History of Southern Food. McDaniel has served as a judge for the James Beard awards and a consultant to Food Network shows and Anthony Bourdain’s No Reservations on the Travel Channel. Julie Stehling is the co-owner of Early Girl Eatery and King Daddy’s Chicken and Waffle in Asheville, NC. She also serves on the Board of Directors for the Appalachian Sustainable Argriculture Project.