American Tuna: The Rise and Fall of an Improbable Food by Andrew F. Smith 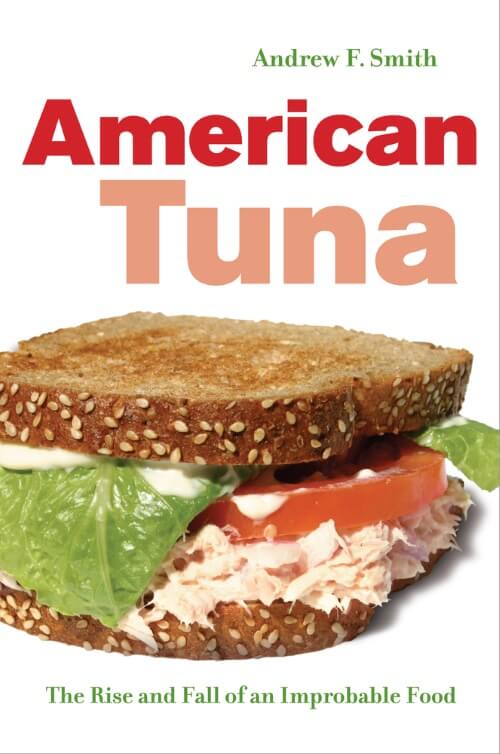 From the publisher: In a lively account of the American tuna industry over the past century, celebrated food writer and scholar Andrew F. Smith relates how tuna went from being sold primarily as a fertilizer to becoming the most commonly consumed fish in the country.

In American Tuna, the so-called “chicken of the sea” is both the subject and the backdrop for other facets of American history: U.S. foreign policy, immigration and environmental politics, and dietary trends.

Smith recounts how tuna became a popular low-cost high-protein food beginning in 1903, when the first can rolled off the assembly line. By 1918, skyrocketing sales made it one of America’s most popular seafoods.

In the decades that followed, the American tuna industry employed thousands, yet at at mid-century production started to fade. Concerns about toxic levels of methylmercury, by-catch issues, and over-harvesting all contributed to the demise of the industry today, when only three major canned tuna brands exist in the United States, all foreign owned. A remarkable cast of characters— fishermen, advertisers, immigrants, epicures, and environmentalists, among many others—populate this fascinating chronicle of American tastes and the forces that influence them.

Andrew F. Smith teaches Food Studies at the New School University in New York. He is the author of Fast Food and Junk Food: An Encyclopedia of What We Love to Eat, Potato: A Global History, and Eating History: 30 Turning Points in the Making of American Cuisine, among many other books. For more information, please visit www.andrewfsmith.com.