American Diner Then and Now 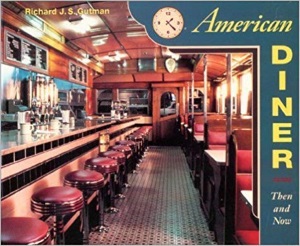 From the publisher: From the first diner in 1872 to the “rediscovery” of diners in the 1990s, Richard J. S. Gutman’s American Diner Then and Now covers the history, architecture, menus, and the appeal of this uniquely American creation. With 275 photographs in color and black and white, this book is the landmark work on its subject, a revised and expanded edition of Gutman’s classic American Diner—the book, published in 1979, that inspired people to buy, restore, and reopen diners across the country. This edition includes a state-by-state directory, “Where the Diners Are,” listing locations for currently operating diners.