Al Dente: A History of Food in Italy 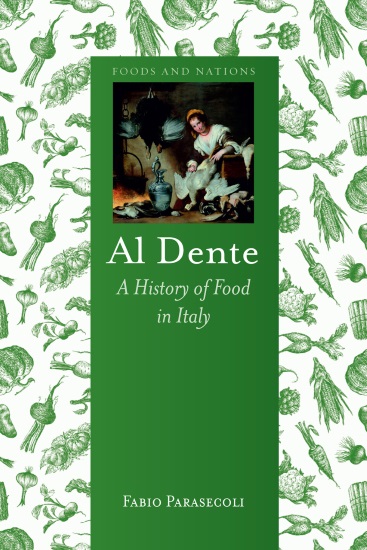 Spaghetti with meatballs, fettuccine alfredo, margherita pizzas, ricotta and parmesan cheeses—we have Italy to thank for some of our favorite comfort foods. Home to a dazzling array of wines, cheese, breads, vegetables, and salamis, Italy has become a mecca for foodies who flock to its pizzerias, gelateries, and family-style and Michelin-starred restaurants. Taking readers across the country’s regions and beyond in the first book in Reaktion’s new Foods and Nations series, Al Dente explores our obsession with Italian food and how the country’s cuisine became what it is today.

Fabio Parasecoli discovers that for centuries, southern Mediterranean countries such as Italy fought against food scarcity, wars, invasions, and an unfavorable agricultural environment. Lacking in meat and dairy, Italy developed foodways that depended on grains, legumes, and vegetables until a stronger economy in the late 1950s allowed the majority of Italians to afford a more diverse diet. Parasecoli elucidates how the last half century has seen new packaging, conservation techniques, industrial mass production, and more sophisticated systems of transportation and distribution, bringing about profound changes in how the country’s population thought about food. He also reveals that much of Italy’s culinary reputation hinged on the world’s discovery of it as a healthy eating model, which has led to the prevalence of high-end Italian restaurants in major cities around the globe.

Including historical recipes for delicious Italian dishes to enjoy alongside a glass of crisp Chianti, Al Dente is a fascinating survey of this country’s cuisine that sheds new light on why we should always leave the gun and take the cannoli.

Fabio Parasecoli is associate professor and coordinator of the Food Studies Program at the New School for Public Engagement in New York City. He is the author of several books, including Bite Me! Food and Pop Culture and Introduction to Culinary Cultures in Europe.