Taste for War: The Culinary History of the Blue and the Gray 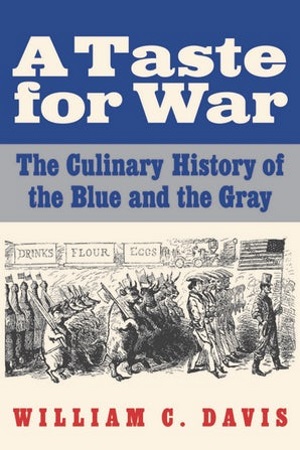 From the publisher: For soldiers in all wars, mealtime is a focal point of the day. Armies do indeed “march on their stomachs,” as Napoleon said. Soldiers of the Civil War armies, many away from home and mothers’ and wives’ cooking for the first time, were thrown back on their own resources both to prepare their own meals and often to stock their larders. No one in America, North or South, was prepared for the massive task of acquiring and distributing the uncountable tons of foodstuffs necessary to keep almost three million men fed. And yet food and mealtime were the dominant topics of interest and conversation, and the fodder for a great deal of the war lore. A Taste for War looks at what soldiers ate during the Civil War, where they got it, how they prepared it, and what they thought of it.

Leavened with first-person accounts of finding and preparing food, A Taste for War includes more than two hundred recipes drawn from soldiers’ letters and diaries and from the few cookery guides furnished them by their governments. The recipes are adapted with instructions for modern preparation that allow readers to recreate the distinctive flavors and aromas of the Civil War.

William C. Davis is a professor of history and the director of programs of the Virginia Center for Civil War Studies at Virginia Tech. Three-time winner of the Jefferson Davis Award, Davis is the author of more than forty books on Civil War and Southern history, including Look Away! A History of the Confederate States of America.